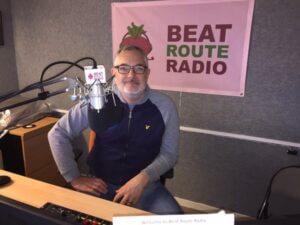 Dave Francis began in Community radio over 10 years ago. He presents the Jazz Funk & Soul Show on a Saturday night between 10 and midnight. Dave got into this genre after sneaking records out of his older Brothers record collection and playing them while he was out. Dave remembers being “Totally blown away” by what he heard and has been a fan ever since. Dave really likes Brit Funk, a British variation on Jazz Funk. “It’s a lot rawer than, and not as polished as its American Cousin. His favourite artists, include Hi Tension, Light of the World, Incognito and Level 42.

Karen Stigter Live now on Beat Route Radio broadcasting live from Rushden and Higham Rugby Club at Manor Park, Rushden.Come and join us, tell us your story, tell us about your charity or good cause and share with our listeners.Looking for something to do on this gorgeous Sunday? Come along, there’s a fun fair, loads of stalls and the amazing “We’re a Knockout” with their It’s a Knockout inspired course.We’re here until 5 so come and say hi. ... See MoreSee Less
View on Facebook
· Share

Programming may vary during public holidays

We use cookies on our website to give you the most relevant experience by remembering your preferences and repeat visits. By clicking “Accept”, you consent to the use of ALL the cookies.
Cookie settingsACCEPT
Manage consent

This website uses cookies to improve your experience while you navigate through the website. Out of these, the cookies that are categorized as necessary are stored on your browser as they are essential for the working of basic functionalities of the website. We also use third-party cookies that help us analyze and understand how you use this website. These cookies will be stored in your browser only with your consent. You also have the option to opt-out of these cookies. But opting out of some of these cookies may affect your browsing experience.
Necessary Always Enabled
Necessary cookies are absolutely essential for the website to function properly. These cookies ensure basic functionalities and security features of the website, anonymously.
Functional
Functional cookies help to perform certain functionalities like sharing the content of the website on social media platforms, collect feedbacks, and other third-party features.
Performance
Performance cookies are used to understand and analyze the key performance indexes of the website which helps in delivering a better user experience for the visitors.
Analytics
Analytical cookies are used to understand how visitors interact with the website. These cookies help provide information on metrics the number of visitors, bounce rate, traffic source, etc.
Advertisement
Advertisement cookies are used to provide visitors with relevant ads and marketing campaigns. These cookies track visitors across websites and collect information to provide customized ads.
Others
Other uncategorized cookies are those that are being analyzed and have not been classified into a category as yet.
SAVE & ACCEPT